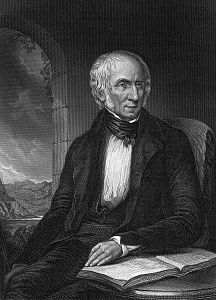 Wordsworth was doomed to be Wordsworth. Even at age 16 he was writing extensive descriptive poems of the places he’s seen, the every twig and feather seen on his walk. Of course, the words call to mind my own roving through his lake district, early in the morning, over misty hills, surrounded by sheep, and huddling under my coat in the soft rain, gaping at Grasmere. But it also calls to mind hours and what seemed like years sitting in coffeeshops in Amherst, swatting at flies, reading and re-reading passages aloud, drinking endless coffees in an attempt to stay awake through the dread burden of Wordsworth’s “Prelude.” Prelude to what? was my greatest fear…and “An Evening Walk” is the preparation, I hope, for “Prelude”–I know he valued this enough to have rewritten it and the editors placed it in an appendix. But such a slap in the face as the third or so poem in his Works…it makes me wonder if there is a god. Seriously, his writing is beautiful, and there is a way of reading it, somewhere between cognizance of meaning and hypnotic sleep, in which it makes sense to the soul. Professor Curtis and I would speak about the Prelude as if its reading was a progression through cancer, some weeks better than others. Oh, this week it made no sense to me, and there was nothing I could do, I worked through every line with a pickax and almost slit my wrists. This week, something happened, it all made sense, I found the necessary pace, and I trotted through the lines in a place nobody could touch me, I was inside the poem, I felt Wordsworth, I feel as if life will never end. This week, everything was shattered, I don’t understand why. Anything by Wordsworth makes me suspicious–I never know if I am reading the words of an old or a young man. And I don’t know how much it matters. If he was Whitman, I wouldn’t be concerned, but he is Wordsworth, and his soul seemed to rather shrink with age.