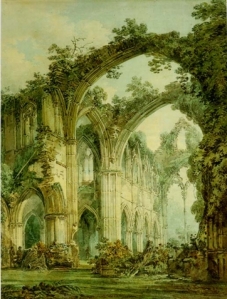 Dogpatch USA: an abandoned amusement park in Arkansas I once visited during childhood. First I was trying to figure out how to use the weather channel website–I check the weather less than once a year because it’s pretty much the one thing over which I feel I don’t have supernatural power. And while I still can’t figure out if I should expect my 6am meeting at the gym will be cancelled due to snow, I did find over a hundred photos of decaying amusement parks.

I spend far more time than I should searching for color photos from before the 1930s, abandoned buildings, ghost towns, any and all evidence that the past was not only real, but vivid and modern. I ask myself, why do I care?

Very early in this blog, which I began while I was sick, I spent a lot of time sitting on a beach chair in the garage staring out the open door. And one of the most profound moments of my life occurred during this time, when during a rainstorm I watched as a corridor of oaks’ limbs began bowing, and then I was within a gothic cathedral. That is, even during those rotten middle ages, plagues and pigs and shit in the streets, what led to transcendence could be found in a place that imitated the untamed forests beyond the city gates.

I came to a realization recently, when I was reading about how it feels to die (and come back to life)–panic is something your body does when it knows it’s probably about to die. This is why you should be nice to your friends who have panic attacks and phobias–they  understand that they’re being silly, but their bodies believe that they are truly going to die–and every single time, every single time–it’s a mock execution for them. Think about that.

Panic happens whether you’re drowning or have lost a certain quantity of blood. It’s what happens when Reilly was scared of thunderstorms and she’d scratch the paint off the walls and break her teeth on the metal bars of her crate. It’s what happens when you zap ants in the microwave and they run around real fast. You flail. And if you live long enough to run out of oxygen, you hit a moment of ecstasy similar to taking nitrous at the dentist’s office (nitrous blocks your oxygen), and then you die. No matter how civilized we feel, no matter how amazing our iPhones are, senescence and instincts are our poor lot in life, and we cling desperately to life if we possibly can, bodies contorted and faces grimaced.

And our architecture reflects this–if in a million years they find our cities, they will know how we lived and how we died.

Our buildings are horrors. Reflective of nothing natural, and then in their decay, we see the great effort nature must make to subsume it all, and the colors are all wrong, the textures harsh, the angles sharp enough to actually be harmful, our ruins dangerous to touch.

Romanticism always seems to move in waves from the Germans to the French to the British to the Americans, as Poe, by the time of Goethe’s death, is still traipsing about in style of Goethe’s youth. But it seems the Germans from whose hearts romanticism springs naturally, which is why it’s pained me so long, when we two Jews, her painting, my writing poetry, night after night, discussed the perverse and exciting romanticism of Byron that yet becomes bulky and one trudges to Wagner and then to the 1930s, a figure of those dark years, Albert Speer, had a theory I’ve agreed with…no matter how I try to get around doing so. 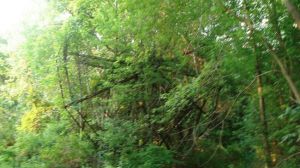 The theory of Ruin Value. That buildings should decay beautifully. That they should decay with dignity. Why is it that Tintern Abbey (top) strike me as calming and reassuring, while Chippewa Lake Park (right or above) fills me with horror and anxiety? It isn’t that one is meant as a holy place and the other as amusement–it’s that in the decay of our architecture we see a reflection of our own deaths. Will Durant’s “a nation is born stoic, and dies epicurean,” I think may be expanded to civilization as a whole, as the epicureanism that built the Parthenon is stoicism to that which built our Six Flags.

It’s all enough to give me bad dreams.