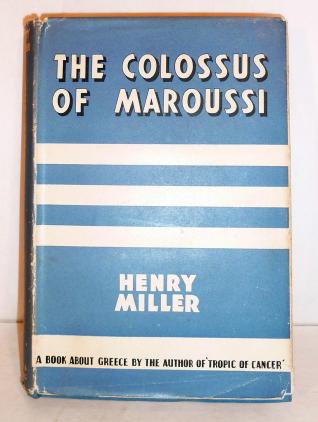 I have one of the most remarkably poor memories of anyone I’ve ever met. Perhaps the very worst. What I can handle, though, is something a lot of people have told me is not only strange, but also difficult: I’m generally reading between 20 and 30 books at a time, and I stretch out reading them sometimes over years. It’s a bit foolish, but I seem very able to compartmentalize many parts of my life that way, so they exist in their own worlds uninterrupted. That’s characterized as a coping device as part of some disorders. How fascinating. So, judging by the book’s price, which was written in British pounds, I’ve been reading this book for two years. It’s a little over 200 pages. From the moment I began it I was enthralled in that way only Henry Miller and Anais Nin have ever done me. It’s essentially a travel book recounting Miller’s year-long vacation in Greece, and a remarkable account in that there’s nothing in vaguely erotic, which is usually Miller’s big draw. The emphasis is on Miller’s own experiences, his own transformation, and he makes clear that he does take some artistic license–and then the book isn’t really about Greece at all; it’s about Miller and his friends. His travels, the people, the sights, all are generally used to illustrate larger points–the sort of explanations that leave me breathless, unable to continue, always visualizing myself lost in space, but floating with determination.

Of course his Greece is much like his Paris, pre-War, and though he speaks in a recognizably modern voice, he lives in a world very much lost to us, I’m quite sure, as we all come to look the same and live electronically. In the book everyone loves Americans and America. They cheer us for saving them, and hope that we will save Europe from the war. I’m thankful that there was a Henry Miller writing during those years that I’m so fascinated by, and I wonder if perhaps he could have existed at any other time, if Henry Miller invented those years or they invented him.