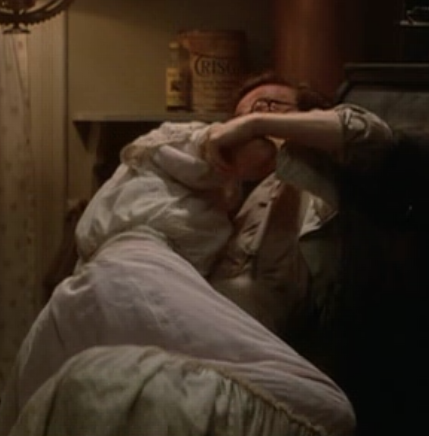 I’m drinking my father’s beer, just pizzazzed up (shouldn’t the plural of pizza be pizzazz?) my mother’s stirfry with WHOLE WHEAT PASTA, lime juice, teriyaki sauce, tobasco, and sugar (it was DREADFUL…i’m so sorry), and this film made me laugh about things I wouldn’t have found humor in a decade ago.

“Can sex and love be different from each other?”
“Sure! Sex relieves tension and love causes it.”

I was inspecting some toolbag’s bookshelves and found them to be remarkable in what can only be described as their retention. Goethe, Anais Nin, Hofstadter, how lovely to be well-read. And is it possible to, in this day and age, use it for evil? What with most of the fine educations, okay, all the fine educations, going to the well-endowed, mustn’t those without satin shoes and saffron condoms be at least of fortunate demeanor? I simply do not want to read anymore, not if it will turn me into a wrinkly arse, a mean-spirited so-and-so, an upstart crow.

Why shouldn’t Woody Allen make whatever films he pleases? And why shouldn’t he place himself in the lead? And why shouldn’t he remake classics to suit himself? He’s also prolific, which is an archaic concept, even for serious-minded graffitists. In the vast sea of collegiate dung, at least one can find a few diamonds, which the dung would claim were formed in the collegiate intestines, but which were truly just indigestible. Like twigs.

Better to be a twig than dung, but your salary won’t be nearly so high. So you probably won’t have healthcare.

Anyway, “Wooden Allen, or Artificial Exteriors” is written by Bert Cardullo in The Hudson Review, and he doesn’t even notice himself being mocked in Sex Comedy, as he writes with the same tone as Leopold speaks. Allen is a TV comic writer (mais si, si, I differenciate between comedic and comic, I’m a big pile of dung) and not worthy of sharing a sentence with Strindberg, the artistic godfather of O’Neill (who knew his place) and Bergman (whom Allen lathered up and shaved and smeared all the shaving-filth onto film and made his career, ah, ah)–Allen is clearly not the person we think he wants to be and is therefore a sympathetic puddle of redundancy, and and and and here’s another nine pages of what I think is important.

If only a fine education was expected and received by all…first, there’d be no Sarah Palin, and second, those of intellectual prowess would stop coddling the pricks of these useless critics whose life-experience begins and ends before their belly-button strings are thrown away. Senses and emotions, yes, indeed, those things bouncing around inside the plebs!

You know what I think of Ben Jonson? I walked out of a Ben Jonson performance. Senses and emotions, you can’t discuss them if you haven’t any yourself, you can’t appreciate the bouquet of wine when you can’t appreciate the bouquet of the earth at night, or the snow, or the deep autumn forest. But you can believe that’s precisely what you’re doing. And that’s culture. And you’re wrong, wrong, wrong.