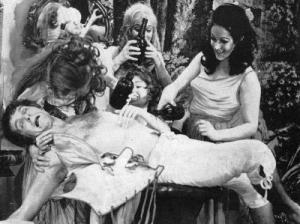 “Whereas the state institutions provided by Rousseau’s Social Contract allow us to recapture some of the goodness and innocence we enjoyed in our original “Nature,” Sade sees all governments as evil because they thwart and curb humankind’s innate cruelty. According to Sade–here the argument grows increasingly fiendish–it is precisely the cruelty which we must retain and cultivate in order to be true to “Nature.” “Cruelty . . . is the first sentiment that nature teaches us. A child breaks its rattle, bites its wet nurse’s nipple, and strangles its pet bird, long before it reaches the age of reason. . . . Among savages, cruelty is far closer to nature than among civilized men.” In Sade’s view, only the institution of far “gentler” laws can create a gentler society. “But laws may be so mild, so few in number, that all men, no matter what their characters, can easily comply.” -Francine du Plessix Gray